Posted on December 4, 2011 by Louis Maistros

Normally this blog is all about pictures — only one at a time and very few words attached if any — but last night’s strange attempt at a second line in Coco’s honor was so charming in its drunk-ass good-natured way that it deserves a bit more. Here’s the story.

My little family usually attends this sort of event as a whole, but since the girls were otherwise predisposed, and since I didn’t want to miss a single tributary moment to one of the greatest men I’ve ever known (and one of the first friends I made in this city when I moved here all by my lonesome in late 1995), I decided to take Booker along and try to feel Coco’s spirit if I could.

Here’s Booker, standing outside Marie’s Bar on Burgundy Street, a little before 5 o’clock, waiting for the second line to begin. 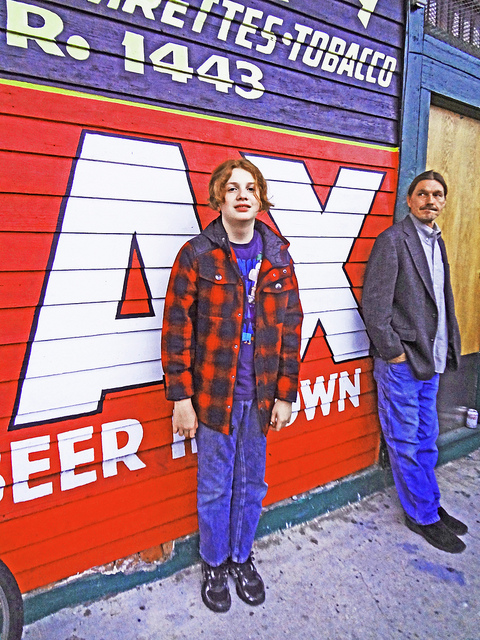 Born and raised in this neighborhood, the kid loves a good parade. Coco used to come see him often when we had our old Decatur Street music shop, Louie’s Juke Joint, and even blessed him as a baby. But, sadly, Booker has no firm memories of those days or Coco. Still, as we waited for the parade I told him a few great Coco stories from when he was small, and he seemed really excited to be a part of this second line. But when it got to be past 5 and there were only a couple of folks holding brass instruments, we began to wonder what was up… 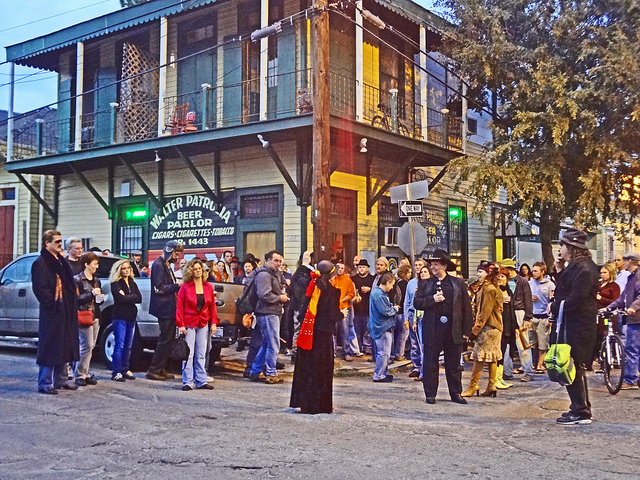 At about 20 past five, it became obvious that there was no brass band. How do you do a second line without a brass band? Well, you don’t. It’s pretty much unheard of. But this group did not want to let Coco down. And most were just drunk enough by this time to attempt a second line without music. The lady above in the long scarf rallied the troops, and we marched around the block like a bunch of joyous fools, chanting the lyrics to Coco’s classic “Walk With the Spirit” in a sort of nonmusical call and response format. I thought it was a little nuts, but Booker thought it was awesome in its strangeness and had himself a ball. Because he was happy, so was I. And really, it was one of those eccentric New Orleans moments where you just don’t know what’s happening till it’s too late, and by that time you need to adjust your attitude and just roll with it. So we merrily rolled, as passersby and people slowing in cars said things to us like, “Is this a second line? Where’s the music?” You could only respond in one way: Laughter. And that we did. 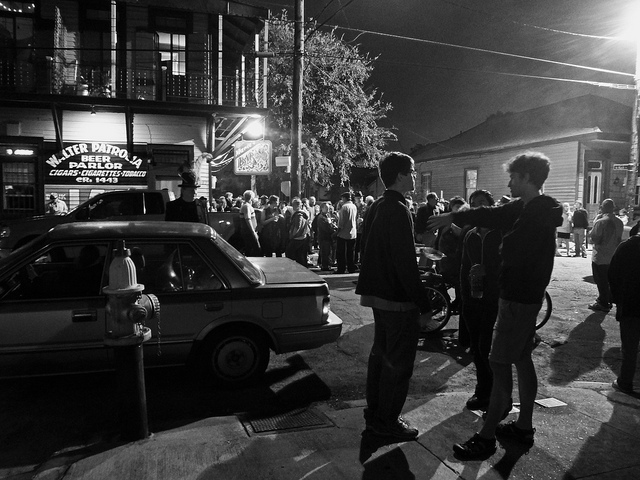 We only got as far as around the block, then headed back to Marie’s. By the time we got back, the few musicians that were there earlier had left, except for a single lonely sousaphone player. A car rolled up and he put is horn in the backseat. Someone asked: “Are you leaving?” The sousaphone player answered: “Yeah, I got another gig. Private party.” It was like a scene out of “Treme.” So that was that. Not knowing what else to do, the attempted second line transformed into a straight up street party in Coco’s honor. There were still some rumors of a brass band that might materialize and save the day, but it didn’t happen, and it didn’t matter at this point. 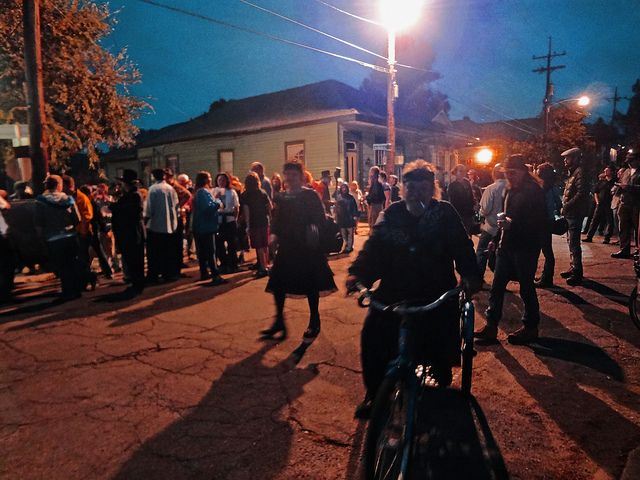 What started as awkward, embarassing and a little disappointing, turned into a good thing very quickly. Alcohol flowed and stories were told. Everyone was sharing their favorite memories of the man of the hour, and suddenly I’m thinking it’s a fortunate thing, in a way, that there was no band. This is what New Orleans is really about to me. It is a city that adapts on the fly and makes a sad song better against the odds simply because that is what we do. And that’s a beautiful thing.  But now folks are getting so drunk that I’m thinking I need to be a good parent and take my kid home. (Dude on the tricycle above was so hammered he nearly ran me over as I snapped that shot — ha). But Booker was having a blast and snapping his own photos of everything that interested him; from the crowd to the moon above. I decided Coco would have especially loved seeing him taking pictures of that sneaky bright moon, so we lingered on. 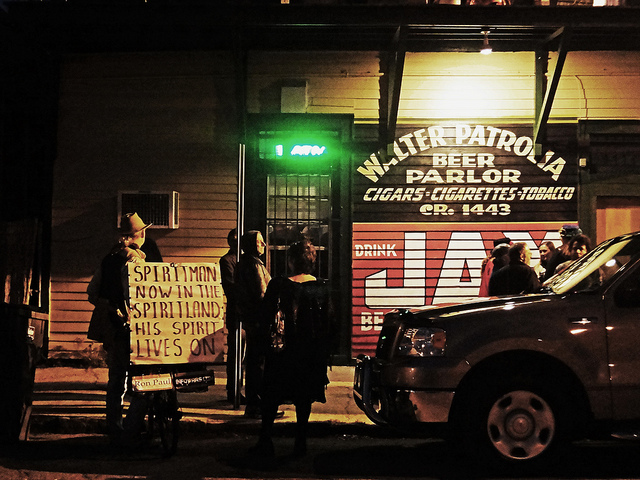 I was so moved by the sign this gentleman had attached to the back of his bicycle that I even found it in me to forgive the Ron Paul bumper sticker. (Just kidding Ron Paul, fans.) 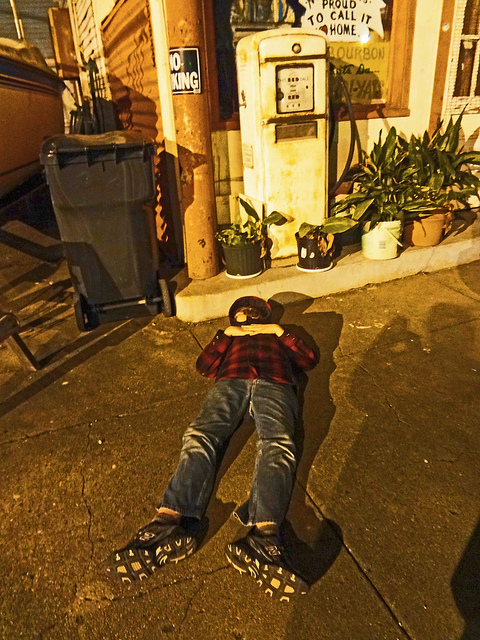 As the evening wore joyfully on, Booker lost interest in snapping photos. Too young to drink, and not having any Coco stories of his own to tell, he did what any self-respecting native New Orleanian would do. He stretched out on the sidewalk and had himself a little nap under the light of the silvery moon. Time to take this poor kid home. 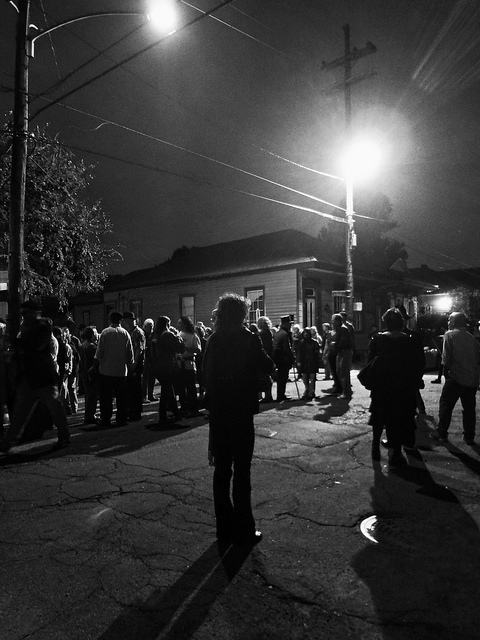 So what was supposed to be a second line parade turned out to be a group of happy-sad drunks who forgot to call a brass band; laughing and crying and talking to each other about how much they loved their old friend. I know in my heart that Coco was pleased by this night. It was good, it was true, and it was New Orleans to the core. I felt his presence and I could nearly hear his laugh.

The “official” second line for Coco is yet to come. December 12 at 3:30 PM from the Apple Barrel to the House of Blues. I assume there will be a band this time, and I’m sure there will be lots more stories, drinking, laughing and crying. Be there if you can. But you know, it won’t be the same as this kooky little neighborhood gathering. And that’s ok because both events will be so different –and for the same good reason. We all just really loved this guy.

I was up all last night listening to Coco’s “Spiritland” album over and over again on headphones. It still amazes me just how good that record is, it really is magnificent. On headphones Coco’s voice was just so clear, like he was right there with me, and in a way he was. Not many people mention his great song “I Knew Without Asking,” but it was one of my favorites by him because it was just a perfect love song — not exactly what he was best known for. The words to that one took on a whole new meaning for me last night. And “The Saturday Night Before Christmas” brought real tears to my eye.  But the song that really spoke to me (and to the night) was Coco’s “We Will Fly Away,” the lyrics of which I have transcribed below. Best to let Coco have the last word here anyway.

We Will Fly Away by Coco Robicheaux

Why should the darkest of our days
Conceal the glimmer of the light?
And the parting of our ways
Reveal the brightest of our nights?

Darling, I know you need to be free
Cuz it’s the same old feeling deep down inside of me
And if our love should make us fly
We’ll meet again somewhere up high

I wonder if there’ll come a day
And if it does what will we do?
When all our troubles fade away
Will we vanish with them too?

We miss you, Coco. See you soon.